Overslept by about four hours this morning...

Which of course is neither here nor there in any significant way but most extravagantly upset my morning routine. It is the feast of Saint Felix of Valois ("surnamed Valois because, according to some, he was a member of the royal branch of Valois in France, according to others, because he was a native of the province of Valois", saith the Catholic Encyclopedia; Introibo, Wiki-- whose authors consider that the 'royal branch of Valois' hypothesis is false, evidently) and Holy Mass will be livestreamed at 1000 from Paris. The Royal Opera's concert performance of Handel's Ariodante is, their website assures me, at 1130 here.

The Trinitarian Order, established by Saint John of Matha and Saint Felix, devoted itself to contemplation of the ineffable mystery of the Most Holy Trinity, and to the redemption of Christians taken captive and enslaved by the Mahometans, by, as we would more commonly say in these days of decadence and derangement, the Muslims. There is a broad literature on the subject of Muslim enslavement of Christians which I'm almost entirely ignorant of. It is a peculiarly delicate academic field in these days of tolerance, diversity, and multiculturalism. And so forth.

~~~
Klassikaraadio is broadcasting a concert program featuring the winners of the Klassikatähed television competition in September; 'Classical Stars' was in its fifth season. Only in Estonia! 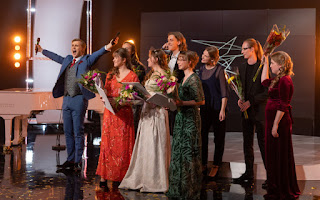 This gala concert is a performance of the Estonian National Symphony Orchestra in the Estonian Concert Hall in Tallinn (and is part of the prizes awarded) and it is being broadcast live on television, too. The three winners were pianist Tähe-Lee Liiv in first place and then Triinu Piirsalu, violinist, and Siret Sui, flautist. Liiv is performing Chopin's Andante spianato et grande polonaise brillante in E flat major op 22; Piirsalu Sibelius's Violin Concerto in D minor op 47; Sui Carl Reinecke's Flute Concerto in D major op 283. There is a heck of a lot of talking ongoing-- Klassikaraadio has allowed two hours for this installment of its daily 'Concert Hall' show-- which of course is going over my head. It is time for Mass, alas, so must leave this.
Am listening to the Reinecke during M. le Chanoine's sermon, ahem.
~~~
Post Sextam. The livestreaming from the Royal Opera House (Handel's Ariodante) is working perfectly but I had the speakers on for the machina prima (the Klassikatähed concert) instead of for the machina altera. Joined the concert only upon noticing the moving images of the video after it had been four minutes in progress, tsk, missing most of the five minutes or so of the Overture. Eh. I don't recognize the first woman on stage but do Iestyn Davies (singing Polinesso)-- have never seen him in live performance before. They are using some adaptation of the libretto i.e. it isn't the integral text, which I disapprove; perhaps the exigencies of a concert staging require this. On further consideration, they don't; more likely to be some specious plague nonsense somehow. And there's Gerald Finley.
~~~
Notre-Dame de Chrétienté (who organize the annual Pentecost Pilgrimage from Paris to Chartres) sent an email this morning urging the faithful to attend one of the more than 60 demonstrations this weekend against the French government's closure of the churches until February 2021. I can't find a link to that particular article but there is this post at Le Salon Beige.
Beginning tomorrow, the feast of Our Lady's Presentation in the Temple of Jerusalem, and ongoing until Holy Thursday, the kalends of April in the new year, a crusade of prayer is proposed by the Superior General of the Priestly Fraternity of Saint Pius X, Mons Davide Pagliarani, under the heavenly patronage of the great Mother of God using the 'weapon' of her holy rosary, for the obtaining of freedom of public worship and an increase of vocations.
~~~
The Ariodante was quite splendid-- all the singers are beautiful, they each have lovely voices: I tend to find trivial offnotes to notice but didn't see or hear any in this production (which I can watch again, until December 20th; hadn't realized that until a couple of minutes ago). Gerald Finley and Iestyn Davies are familiar enough that I expected glorious singing; Chen Reiss (Ginevra) and Paula Murrihy (Ariodante) were both new to me, and gave quite vivid performances. Ed Lyon and Sophie Bevan I knew of, don't ask me how; the role of 'the king's favorite', Odoardo, was sung by Thando Mjandana, who was also unfamiliar. While Reiss and Murrihy sang the most obviously spectacular arias, the others made the entire two and a half hours the high point of the week.
***
Chen Reiss Contra Mahometismum Domus Ed Lyon FSSPX Gerald Finley Handel's Ariodante Iestyn Davies Mons Davide Pagliarani Paula Murrihy Sacra Liturgia Sophie Bevan Thando Mjandana