Today is the feast of Saint Martin of Tours, Patron of France, here (the Catholic Encyclopaedia) and here (Wikipedia). Sulpicius Severus's Vita is here and and in an English version here, although there are, obviously, more recent translations available (e.g., here). I was sure that there is a Schola Hungarica recording of a mediaeval Missa Sancti Martini at YouTube but evidently not so I will content myself with Bruckner.

Am returned from my morning spatiamentum and the fog is dissipating although it appears to be an overcast mid-morning. The Neumz people send occasional emails, including one today featuring the hymn (by Odo of Cluny) for Lauds, Martine par apostolis, as it was recorded last year on this date. While I imagine that this won't work, one can try this link. And it does-- but that may be because I clicked on it from this laptop.

Klassikaraadio is broadcasting, livestreaming, the final concerts of the Estonian String Players Competition 2020, dedicated to the memory of Eduard Tubin; he was born in June 1905. The soloists are performing with the Estonian National Symphony Orchestra. I cannot be sure of the details but so far as I can tell the Competition doesn't end until Friday, so perhaps we may have one or two more concerts to listen to. The World Concert Hall site says that this is the first round, which does make sense of the translation I got from Google Translate.

There looks to be a possibly interesting concert at Hostebro in Denmark, livestreamed on DR P2, later on but am not going to notice it by more than this unless I actually get to listen. The program begins at 1020 my time; Holy Mass is at 1000. Time for Terce and breakfast.

A 'two week pause' goes into effect in Portland today ('what you can and cannot do in Multnomah County', the headline reads at the Oregonian) because idiots remain afraid of the plague and other idiots enjoy exercising state power. I was pleased also to read that Oregon's voting registration system "is 'vulnerable' as it relies on a software program that is no longer even supported". Good to know, since the general election is over. I don't look at that propaganda organ very often but when I happen to it almost always repays my effort with amusement and disgust.

Dr Eleanor Parker (A Clerk of Oxford and @ClerkofOxford) wrote a series of tweets this morning, marking St Martin's Day. One of her readers (@Noorderlisa) posted the photograph infra. Apparently, in parts of the Netherlands tonight is the night for children to carry illuminated voederbieten, fodder beets, mangelwurzels, through the streets and receive treats from the neighbors. 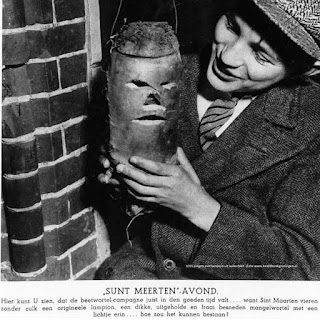 Sulpicius Severus recounts an odd story about S. Martin of Tours, whose Feast we celebrate today. It was on last journey before his death, he and his disciples past by a river where a number of birds were gobbling up fish in a feeding-frenzy. S. Martin was not amused:

This [exclaimed the saint] is a picture of how the demons act: they lie in wait for the unwary and capture them before they know it: they devour their victims when taken, and they can never be satisfied with what they have devoured.

He then proceeded to command the poor birds to fly off to “dry and desert regions.” The birds obediently flew off, “to no small wonder of many.”

Saint Martin, "who didst neither fear to die nor refuse to live" (the Vita), pray for us and our poor Nation, so far from the heavenly Good!

The good folks at Canticum Salomonis provide us with the Latin and an English version of a sermon of the venerable Honorius Augustodunensis, probably of Autun, on Martinmas.

... On a certain solemnity, when Martin was sitting in the sacristy about to celebrate mass, lo! a certain beggar asked him for clothing. Martin immediately sent the deacon to get clothes for the beggar. Since he tarried, Martin removed his own clothes and vouchsafed them to the beggar. When the deacon returned, he urged the bishop to celebrate mass, saying that the people were tired of waiting so long. Martin replied that the beggar should be clothed first, and thus God’s service would be performed. The dyspeptic deacon purchased a short black garment from a nearby shop with a few coins, and angrily cast them at the bishop’s feet. But Martin, not at all bothered, ordered the deacon to leave and secretly put on the clothes he had brought. And so he went up to mass with his arms half bared, but the Lord made the merit of this illustrious prelate manifest before the assembled people. For as he celebrated mass a fiery sphere rose from his head and its flames grew reaching up to the highest heaven.* Often, too, during the mass Martin’s hands seemed to shine with jewels and to crackle with gold and electrum....

The note I've asterisked is note 8 on the Canticum Salomonis site, and refers to the Cantus Index, wherein are being catalogued every know liturgical chant from the Latin tradition. The responsorium in question is--

Whilst blessed Martin offered the Sacrament a fiery globe appeared upon his head.

Dr Gregory DiPippo at New Liturgical Movement (he is one of the docents at Masters' Gallery Rome, also) wrote a post today about the Ambrosian preface for the feast.