'I respect your distancing requirement, respect my freedom to worship'

In France today, hundreds of the faithful assembled in front of their cathedrals and churches demanding that the state return to them the possibility to hear Mass-- the government has forbidden public Masses until February. This post at Le Salon Beige assembles a few photographs and videos; the photo infra I've taken from it. 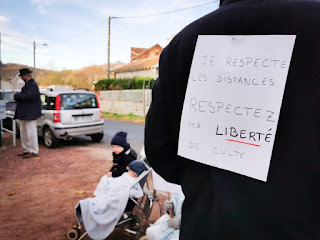 It is wonderful that so many people participated in this protest against the government's wickedness. I hope the numbers double next Sunday!

Having 'been positive', now I will lament the lack of mass resistance to the state's suppression of the Church's rights on the pretext of 'health and safety'. There ought to have been hundreds of thousands in the streets. Still; all such things are subject to Providence. My understanding is that there will be no public Masses here at St Mary's for the next two Sundays because of Governor Brown's nonsense decree earlier this week. I wonder; I ought to go downtown next Sunday and pray Prime and Terce and the rosary outside the front doors but I do feel rather the hypocrite since I wasn't able-- mea culpa-- to get myself to Mass yesterday evening or this morning.

Vespers of Saint Eugene and Benediction of the Most Blessed Sacrament at Saint-Eugène are now concluded.

The Neumz folks sent a link to the offertory, the antiphona ad Offertorium, for today's feast of Saint Albert the Great; it is from the Benedictine use Common of Doctors of the Church, I think (the Roman Rite commonly appoints the Mass In medio Ecclesiae with its Offertory Iustus ut palma florebit).

The Levabo oculos meos Offertory, commonly used by doctors of the Church, is composed in the eighth mode, G-C. The melody is built, above all, around G, but sometimes the melodic curve rises towards C and develops around this rhythmic pole, underlining a few words that should attract our attention: justitiam tuam, mirabilia tua and mandata tua (“your justice”, “your wonders” and “your commandments”). However, the melodic peak is at ut doceas me (“which you teach me”), the melody oscillating between G and C, the two essential poles of this mode. It reaches the musical peak on the accent of doceas: this word, “teach”, recalls the eminent vocation of teaching that marked the life of Saint Albert the Great.