Damp and cool yet again...

And grey; but the Sun is trying to pierce the cloudiness. A Solemn High Mass for the feast of Saint Eugene at Saint-Eugène; I didn't, as a matter of fact, get up at 0150 in order to follow the livestream. And yet again I neglected to sign up on time for Mass at Saint Mary's downtown: in other words, am screwed so far as real Mass presence goes today, tsk.

One of the reasons I so very much appreciate the solemn celebration of the Mass-- the priest celebrant, a deacon, and a subdeacon are at the altar-- is the chanting of the lessons, the epistle and the Holy Gospel. The gradual and Alleluia are specially lovely in this Mass Statuit. 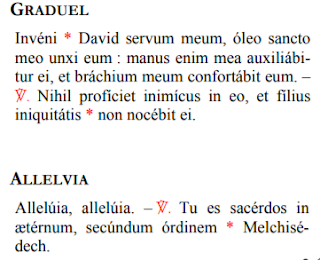 These 'ordinary' parts of the proper of the Mass are followed on the principal feasts by a sequence or prose, although in the Novus Ordo the use of these is severely curtailed (Easter and Pentecost only, I believe). The screenshot app required that I do this in two parts. 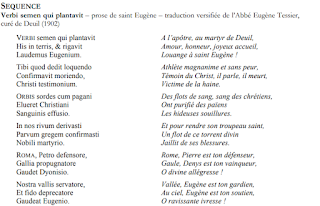 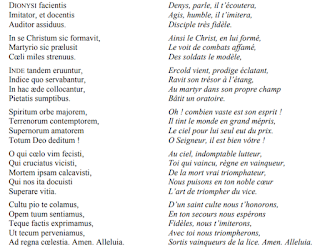 The celebration of Mass begins with the solemn procession during which the relics of Saint Eugene are brought to the altar and venerated with incense and prayers. The Laudes regiae (Christus vincit, Christus regnat, Christus imperat) are sung and a proper litany, proper to France and Saint-Eugène, invoking the assistance of Saint Michael the Archangel and Saint Jeanne d'Arc, and Saints Denis, Genevieve, Eugene, and Cecilia.

The hymn sung during the incensing of the altar, Sancti Eugenii digna memoria, by Marc-Antoine Charpentier, H 55, is at 1:18:00.

The psallendum, a Visigothic chant for the Communion taken from the Hispano-Mozarabic Rite, is sung just before the proper Communion, at about 1:37:50.

The Ordinary of the Mass is the Messe Royale du IInd ton of Henry Du Mont (or Dumont, né de Thier or Thiers 'a Monte'), which appears to be the fifth of his five Masses based on the plainchant. For over 30 years, from 1652, Du Mont had a hand in directing (from various offices) the music at the Royal Court (more specifically, in the chapel of the Queen).

I notice that someone has added to the Wikipedia article the fact that his Masses continue to be sung, specifically at Saint-Eugène; at French Wikipedia, it simply states that his Masses "figurent toujours au répertoire des églises qui suivent la liturgie traditionnelle", have remained in the repertory of the churches that follow the Traditional Rite.