With, considering how much pounding, ultrasonic scraping, and scraping with curettes happened yesterday afternoon, surprisingly little discomfort in those upper regions. I believe we were hastening through the process in the last eleventh and twelfth hours of the three appointments-long cleaning. Three cavities that need to be filled or refilled, and a new post has to be installed and then crowned; the insurance will pay for the former and perhaps (I hope) some aspect of the latter procedure. This would be the first occasion since my retirement when I anticipate having to spend a decently large amount from my own pocket.

It is the feast of the the martyr bishop Saint Josephat (Catholic Encyclopedia, Wikipedia, Introibo) but I missed Holy Mass from Paris because it was streamed at 0200. Once Advent begins I will be making a point of following the Sunday and feast day Masses at that hour again but until then I will continue my post-Corpus Christi 'holiday' from 'em. I had been rising at 0100, saying Matins, then the Paris Mass, then Lauds, and then proceeding with the day-- now that I can go to Mass really downtown am not quite sure how 'proceeding with the day' is going to go. An early night on Sundays, perhaps.

~~~
Post Tertiam. Am breakfasting while Klassikaraadio streams a concert from Tallinn, 'Monteverdi to Vivaldi'; the ensemble is Hortus Musicus, led by Andres Mustonen, with the mezzo-soprano Maya Amir. The venue, 'the White Hall of the House of Blackheads', is... interesting; the translating machina has its moments. After breakfast I will investigate this House of Blackheads.
Am astounded to discover that White Hall of the House of Blackheads is a precise translation. The Mustpeade vennaskond, the Brotherhood of Blackheads, was a Catholic fraternal organisation in Livonia (modern Estonia and Latvia, more or less) that had a religious, military, and social character, like the Knights of Malta or the Teutonic Knights; from the mid-14th century onward. The Nazis suppressed the Brotherhood, evidently; whether it has been re-constituted since the Second World War or the return of independence after the Soviet Russian occupation, I cannot tell. The House (more than one building, actually) in Tallinn appears to be a museum et cetera with rooms suitable for musical performances.

Saint Maurice at St Maurice Cathedral in Magdeburg, 13th century
The name-- unlike the Wikipedia author I'm going out on a limb here-- is from the Brotherhood's patron, the martyr Saint Maurice, patron of the Holy Roman Empire et cetera (the Brotherhood is mentioned in the section 'Patronage' of the Wikipedia article). He has been imagined as a black African since at least the 12th century in the German and northern lands.

I suspect any curiosity about other aspects of the Brotherhood will remain unsatisfied, alas. 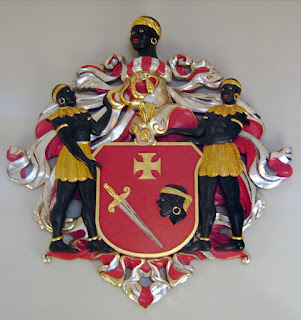 ~~~
Am catching up with the Cracow Baroque Consort's premieres of new works by the composer Mariusz Kramarz. The Suplikacje ('Supplications', perhaps) is impressive. We know the refrain, the Trisagion, from the Office preces and from the Office of Good Friday: Ἅγιος ὁ Θεός, Ἅγιος ἰσχυρός, Ἅγιος ἀθάνατος, ἐλέησον ἡμᾶς! Sanctus Deus, Sanctus Fortis, Sanctus Immortalis, miserere nobis!

As is his Litany of Loreto, the Litany of Our Lady.