Is proving to be quite lovely, pieces of music interspersed with readings from the poets (at least that is what I am supposing the readings are, my Swedish being practically non-existent); of course, it betrays a weird sort of mix  Catholic, Swedish Protestant, secular, pagan) grasp on the realities of the Last Things-- Death, Judgment, Heaven, and Hell. I have gotten it stuck in my head this morning that Gothenburg is in Denmark, even though I know it is in Sweden. 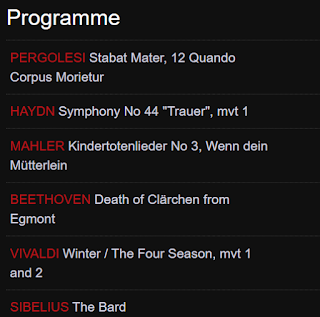 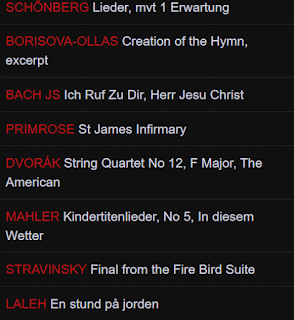 Had to do that in two parts because the screenshot app here on the Brave browser wouldn't copy the entire list at one go (or, I couldn't make that work, ahem).

It is the Vigil of the feast of All Saints, about which Dr Gregory DiPippo has written about at New Liturgical Movement at this page and others over there.

That masterpiece is scarcely a liturgical work but I figure that I may as well post a video of it during these three days.

Tomorrow, at Nice, in the Basilica of Our Lady of the Assumption the Mass of All Saints will be preceded by a 'rite of reparation to render it again worthy of the divine Worship' following its profanation by the Islamist murderer the other day. Am not quite sure what that means in the New Rite. In the Traditional Rite, the Rituale Romanum provides the rite to be used by the priest if a church has been simply blessed; if it has been consecrated, as I have no doubt that the Nice Basilica was, then the priest must use the rite in the Pontificale Romanum with the bishop's delegation.

As Dr Townsend noted yesterday in the Friday Miscellanea, the German government has closed the theatres and concert halls ('all places of entertainment') for a month, from Monday, I guess. Am preparing to listen to the Berliner Philharmoniker concert; it's preceded by an interview with Kyrill Petrenko, to which, it being in German, I wasn't paying any attention at first. Then I noticed that he and the interviewer were talking about this new closure; 'a knockdown blow', Petrenko said, or that is what the English caption said he said. I hope the German wasn't actually 'knockout blow'.

There is a notice that the Philharmonie will closed from November 2 to 30. Maestro Petrenko has added John Cage's 4'33" to the program.

M.R. James is one of my favorite novelists, whose work is the literary subject of this essay by Aris Roussinos (at Unherd) about modernity and conservatism.

...In the end, James could no more fend off the 20th century than could the static, unchanging England he loved. Perhaps it is only now that modernity is itself in crisis, challenged by the re-irruption of the passions of the past into the disordered present, that we can reassess James as an explicitly conservative writer, whose critique of progress, like the ghost tales which envelop it, is most powerful for only facing its horror obliquely.

Am looking forward to Holy Mass from Paris in the morning; the Schola Sainte-Cécile will be singing the sequence Sponsa Christi quae per orbem from the proper of Paris. Adam of Saint-Victor's prose for All Saints is Supernae matris gaudia. I don't see any obvious similarities so I think the one isn't based on the other.