A degree or two warmer this morning...

27° the one machina says. A beautiful Dawn and a very lovely, refreshing spatiamentum earlier and an economical shopping-- four dinners for ten dollars, and some store brand loose leaf black tea with hibiscus. We shall see about that latter item; am pretty sure that Safeway doesn't operate a tea plantation in Ceylon (I can't recall the name we are supposed to use just at the moment) or Assam.

Two crows have begun attending at the breakfast table. They are, so far, quite skittish. The squirrels no longer run off because of the arm movement involved in tossing nuts out to them but the birds still do in spite of the fact that they have to have realised by this point that the arm movements don't end in me flying out of my window after them. Apparently not.

In the Traditional Rite, the feasts of the Apostles (among other feasts, from Easter and Pentecost and 'down') are always preceded by a Vigil (this was changed by Pius XII in 1955, pft). Having said Matins, Lauds, and Prime, I think there is nothing proper to the Apostles Simon and Jude apart from the collect i.e. the ferial office is said-- although Vespers ('First Vespers') is of the feast, of course.

The cellists of the Royal Concertgebouw Orchestra are performing a concert of preludes and overtures later on, although am not sure when. NPO Radio 4 (the Netherlands state broadcasting service) is playing three of  Mussorgsky's lieder from his Dances of Death. Now I must look to see if I figured out the Dutch correctly; not exactly. It is Songs and Dances of Death; en is 'and'. I ought to have remembered that.

The Gyldfeldt Quartett performs music of Schubert, Beethoven, and Nielsen at the Berlin Philharmonie later, too, 1000 1200 here. 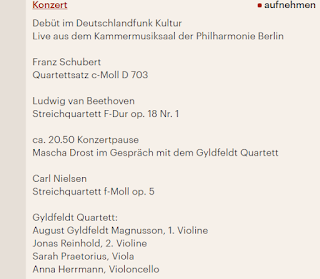 Justice Amy Coney Barrett-- it is a pleasure writing that. Even if Mr Biden wins election to the presidency, I don't think that there is serious risk of the court-packing nonsense the media has been abusing itself with. Not really.

Time for Terce and then the making of breakfast.

It has dawned on me that one of the reasons the European music programs seem to be later this week is that they changed their clocks last Sunday whereas we here in the US won't until the coming Sunday, All Saints.

For some reason (I suspect, for some reason having to do with the various holders of rights) Spotify isn't playing the most recent of the six albums of Mily Balakirev's piano works recorded by Nicholas Walker. But the Elegy on the Death of a Mosquito, completed by Maestro Walker, is at YouTube although it won't upload here. The link is here.