Opening concert of the Arvo Pärt Days festival in Tallinn...

The program includes Beethoven's  Meeresstille und glückliche Fahrt op 112 and the Schicksalslied op 54 of Brahms, preceded by works by Maestro Pärt: Silhouette, If Bach Had Been a Beekeeper (there's a new version, evidently, and this is its premiere in Estonia), In principio. Am ashamed to admit that I don't recall ever hearing the original version of If Bach... from the 70s.

Am rectifying that sorry lacuna now, via a recording from 2015 of the Adelaide Symphony Orchestra, on Spotify.
Eight beautiful minutes; "heavenly lightness" (Douglas Meyer, supra) indeed.
Are there or have there been any American composers widely regarded as 'national treasures' in the way Maestro Pärt is esteemed in Estonia? He will be 85 on the 11th of September. 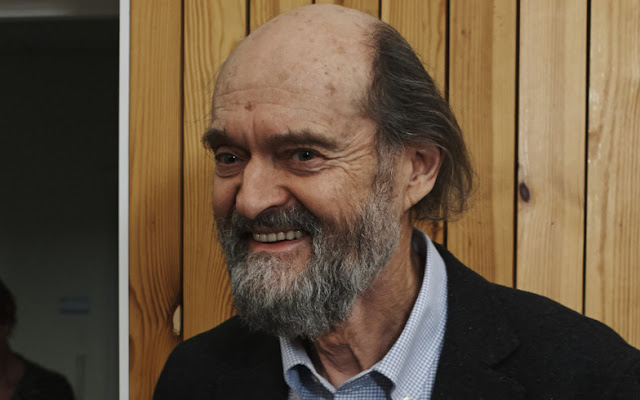 I cannot think of any living American composer who NPR would clear its schedule for to celebrate annually with days of his or her music; perhaps Copland or Bernstein, in 1965.
This is my annual admission that the only time I think of Cyrillus Kreek and his music is when the Pärt Days comes up (which I noticed this morning only because the World Concert Hall people featured this Pärt/Beethoven/Brahms concert). Half of the time I can't on my own keep track of where I've set down my glass of tea, tsk.
***
There is also a concert from St Peter's Church in Riga beginning alas at the same time, but if the Pärt indeed preceeds the Beethoven and Brahms in Tallinn I'll switch after it to the Latvian concert.
The squirrels were back yesterday, for the first time in quite a while; I suppose they have multiple foraging grounds, and they don't like having to fuss with the jays, I think. They definitely curse at the dog and presumably tire of manoeuvring out of his way. The jays certainly don't like fussing with the squirrels but perhaps the squirrels are indifferent.
***
One doesn't trust the ideologues at the Times but apparently that 'scenario' is one that serious people are concerned about for November. My own opinion is that if the states don't manage to get their electors certified by the time the Electoral College does its constitutional duty, the responsibility for the disenfranchisement of those millions of voters lies squarely with the idiots running the state's voting systems. They have known for four years that a presidential election is upcoming in November (it happens every four years!) and have known since April or May that the plague nonsense might induce many more voters than usual to do the balloting by mail nonsense.
They can't maintain order in the streets, they can't deliver clean water to their electorates, they can't manage a quadrennial vote: I myself, were I dictator, would suspend the failing urban governments and impose pro tempore administrators but I suppose there is a reason I'm not dictator.
***
Ante et post Sextam. Today has become 'Listen to the Pärt Symphonies Day' here.
***