The feast of Saint Lawrence, deacon of the Roman Church...

And martyr, is today. The conclusion of a sermon of Pope St Leo the Great preached on the anniversary of his martyrdom, read earlier in the 6th lesson at Matins:

Wherefore, dearly beloved brethren, let us rejoice with spiritual joy, and make our boast in the Lord, Who is wonderful in His Saints, and has given them to us as a help and an example. Let us, I say, make our boast of the extraordinary happiness of the illustrious Lawrence's end, in that same Lord Who has so glorified His servant throughout the whole world, that from the rising of the sun unto the going down thereof, wherever the constellation of the levitical lights may shine, even as Jerusalem is made glorious by Stephen, so Rome is made famous by Lawrence. 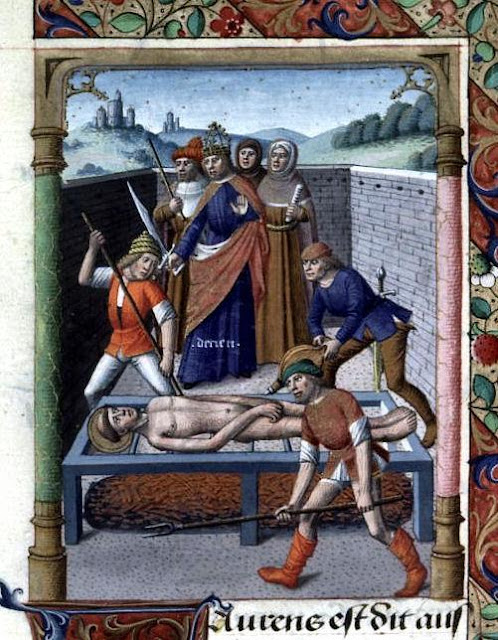 I've lifted that image from the French site Introibo.fr where the day's liturgical texts and commentaries are assembled.

Tried to find an article in the Times and the Guardian this morning worth writing about and didn't. 'The Amazon is the vagina of the world' at the Guardian was the best headline. I looked at the Times for an article about Mr Trump wanting himself added at Mount Rushmore-- there's one at the Guardian-- since people on Twitter were yesterday afternoon talking about Mr Trump's grand troll of the media; the Times appears to have refrained from taking the bait. They imagine that they avoided doing so, at the G., since their headline reports the denial of the story, but they are deceiving themselves.

Am listening to the Belcea Quartet performing two Beethoven quartets, no 9 in C major, op 59/3 and no 7 in F major, op 59/1 (two of the three commissioned by Count Andreas Razumovsky, the Russian ambassador at the Hofburg), with von Webern's Langsamer Satz between them, the concert recorded on Friday at the Salzburg Festival; available at Arte Concert.

At midday, France Musique will broadcast and stream, from La Roque d'Anthéron, Bertrand Chamayou's recital of Liszt, including Liszt's version of Wagner's Feierlicher Marsch zum heiligen Gral from Parsifal. I expect I'll be ready for some peace and quite after all of this.