Of the sort that are called 'earbuds', i.e. they fit into the ear and are entirely unnoticeable in use, except when they are about to fall out, as does happen; quite infrequently, once or twice. Before I begin to ramble, the point is that immediately upon purchasing them I began to receive email from the maker advertising new and 'better' models, which is poor business, I thought, informing me that what I had just spent a huge amount of money on (double digits! 'huge' for me) was an inferior product and a 'worse' model. But they, so far anyway, seem to have been a good investment.

The jays are feeding at my window sill, the Steller's and the scrub both. Endless amusement and interest. Unfortunately, the dog is back this morning (the landlady had to work beyond her usual Tuesday return) and he will scare them off for a while. If they would learn to fly directly in and land on the sill, the dog couldn't touch them (it is a few inches out of his reach) although they can't know that. They fly to the porch table, or to the top of the empty portable cooler, or to the tree branch, or to the porch railing, and only then do they make the short jump to the sill.

A concert (works of Melanie Bonis, Franghiz Alizade, Thomas Agerfeldt Olesen and Mozart-- never heard of any of them, apart from the obvious) broadcast live on DR-- is that Deustche Radio, I wonder-- this morning. German radio would be DW, probably; I must look about: Rudersdal is in Denmark, DR is Radio Denmark. This dropped off the agenda because I recalled that I was meant to be following the livestreamed funeral Requiem for a #CatholicTwitter woman who died the other day. Gercione ('Geska') Rocha Sales Lima, requiescat in pace.

Two concerts from the Grachtenfestival (in Amsterdam; the musicians perform ashore by the canals-- Grachten is 'canals'-- and people attend in their boats), one recorded and the second, Mahler's Des Knaben Wunderhorn, livestreamed. 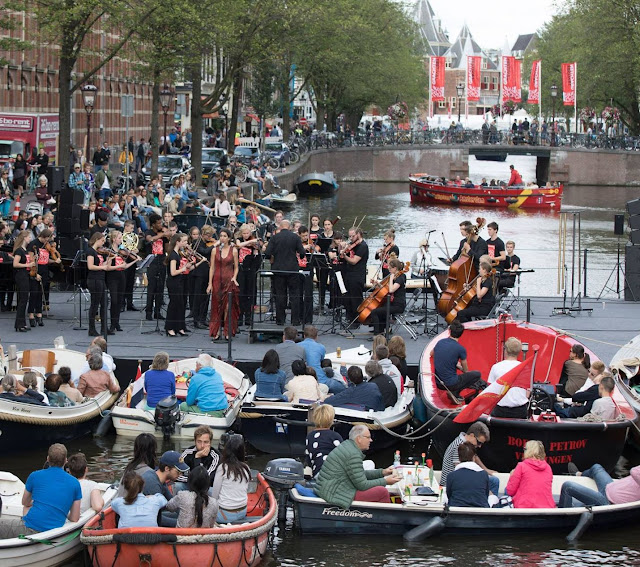 I believe I can listen to both concerts, if I have calculated the times correctly, ahem. The DR one is in 20 minutes, I think, so I must say Terce now.

Was reading this essay by Justin Lee (from Arc Digital) at Medium with vague interest until he got to a certain point. The idea is that, evidently, men prefer to read about male protagonists in fiction but are more likely to develop empathy with women by reading fiction written by women (and I suppose that the corollaries-- by POC, by members of the identities minorities etc etc-- are arguably true too).

The 'certain point' was this sentence.

The best solutions will be begin in the home, with parents modeling ideal reading habits.

I had thought that he was mocking the 'idealists', the Woke, the other day when I read his essay about Flannery O'Connor. If the fellow is seriously advocating that there are 'ideal reading habits' that we ought to be teaching to the poor inmates of the education asylum then indeed I'm more a derisor than a laudator, alas.

In my peregrination through the pages of the Internet earlier, I woke to the glories of the bandoneon, which looks extraordinarily difficult to play-- each of the keys on the two keyboards has two values depending upon whether one is squeezing or expanding the bellows (whatever is the proper term for that) so that there are in effect four keyboards one has to learn; gosh.