Was saddened to see in the Guardian earlier that Maestro Julian Bream has died. His Consort provided my introduction to the music of the English Renaissance; am fairly sure this is the album cover. 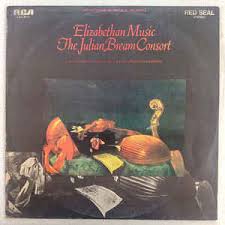 Am going to catch up on the Salzburg Festival performances that are available at Arte today, beginning with Patricia Kopatchinskaja and the Camerata Salzburg from yesterday (perhaps; I know I was suspecting the other day that the actual program is a bit different than what I see on the web site: but I'm easily confused).

But later on will give the Grachtenfestival Prize Concert a listen: the three nominees for the Prize are Daan Bortien, who performed yesterday's Mahler, Shin Sihan, a violinist (interestingly enough, violist in Dutch is violinist; a viola is an altviool, and a viol is a viola da gamba), and the soprano Channa Malkin.

The Ligeti Concerto for Violin and Orchestra is the first piece Miss Kopatchinskaja will play. It appears that she will sometimes perform in bare feet, as in this concert. Eh. I have no idea if she is still considered a 'wild child' (that Times profile is from five or six years ago) but in the classical music world it doesn't take much to gain a reputation for 'otherness'; I imagine she doesn't suffer fools gladly: good for her.

The Ligeti includes provision for the violinist to improvise a vocal part, at the ending, the cadenza: it's a good thing I knew this or else the Kopatchinskaja would very definitely have merited the 'wild child' sobriquet for her work there.

Ah, the Friday Miscellanea at The Music Salon, remembered on the Friday this week, for a change. Inter alia, it is a fact that I associate Maestro Kent Nagano with Messiaen's Saint François d'Assise, probably because the CD set I owned at one time was the recording from Salzburg in 1998 that he conducted-- a splendid career of course but it is that connexion that remains in my head.

Watched the Salzburg Festival production of Mozart's Così fan tutte-- the singers were lovely while the 'minimalist' staging (three white walls) was I'm sure more splendid in Herr Loy's imagination than it appeared on camera. Still. Time for Vespers of the feast of Our Lady's Assumption. Mater pulchrae dilectionis, ora pro nobis!