on July 13, 2020
Today, as Father Hunwicke points out, is the anniversary of the death in 1988 in Nijmegen of the great scholar Christine Mohrmann. 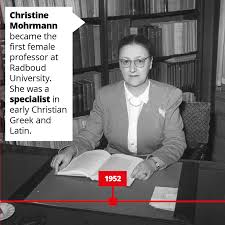 Christine Mohrmann (1903-1988) took a Tardis (a type of British Time Travel Machine) back to the earliest Christian centuries, travelling via philology. Her minute and erudite study of Christian Latin (and Greek) enabled her to demonstrate that it was a distinct dialect of Latin which grew up... and, to a degree, was consciously devised... by the Christian communities....

Mohrmann's studies led her to a strong belief in the necessity for a special priestly hieratic language in the Liturgy (an idea which might not have seemed outrageous to Orthodox Jews!). So (with exceptions such as the lections) she was strongly opposed to use of the vernacular in Liturgy. Not absolutely opposed; it was just that she felt that no modern European vernacular was anything like ready... that is, sacral enough... to be employed at the altar.

There is a short biographical note here by René Braun that appeared in 1989 in Cahiers de Civilisation Médiévale; the Wikipedia page in English is here, and (much more information!) in Dutch here.
She would have been horrified, horrified and profoundly scandalized, at the current state of affairs in Holy Church, at the widespread abandonment of the sacred Latin liturgy, and at the apostasy of her own nation.
Requiem aeternam dona eis, Domine, et lux perpetua luceat eis. Requiescat in pace. Amen.
+++
Christine Mohrmann Fr John Hunwicke Frank Martin Sacra Liturgia