on May 30, 2020
With the celebration of Holy Mass at Saint-Sulpice in Paris; M. le Chanoine Jean-Marc Fournier, the military chaplain (more specificly, chaplain to the fire brigades) who saved the reliquary containing the Crown of Thorns and other sacred relics from the fire-damaged Notre-Dame de Paris last year, also removing the Blessed Sacrament from danger, said the Mass. Have 'borrowed' the photograph from the Telegram account. 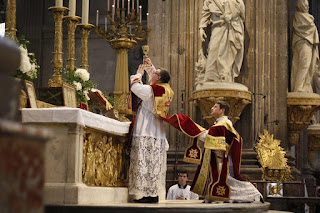 Was up as usual at about a quarter past two in order to have time to say Matins and Lauds before the livesteamed celebration of the Vigil Mass of Pentecost at Warrington. Father de Malleray gave an interesting homily, clever and brief. I was already aware that it would be the 1962 rite-- from which the ancient fore-part was entirely suppressed by Paul VI. Happily, Saint Eugène in Paris will be celebrating the traditional rite with its six lessons and accompanying tracts, the Litany, etc etc and even more happily, one or more actual baptisms: i.e. it was, the traditional rite, fairly close to being a repetition of the Vigil of Easter, although without the new fire, the benediction of the paschal candle and the Exsultet etc. The programme is here.
Am not returning to the use of the Salve Regina until the end of the Pentecost Octave, ahem, but I wanted to put that splendid version here (John Browne "if he existed", says Spotify, "lived during the late 15th c in England, possibly in the region of Windsor or Fairfax"; a better glimpse is here).
After Sext. The Vigil Mass-- all three hours of it-- from Saint Eugène is infra. They are raising funds for new cameras etc that are clearly needed, hence I'm always hesitatant about criticizing this or that aspect of the performance of the music: what I hear or cannot hear or what sounds perhaps rather imperfect is as likely down to failures of the technology as it is to the singer. It was a splendid example, today's Mass, of the celebration of the Tradtional Rite. One or two of the singers of the lessons sounded fairly well strangled, alas: but those prophecies are notoriously difficult to sing, as I understand it. I had never witnessed a celebration of Baptism in the Traditional Rite and, by golly, the principal ministers did prostrate themselves during the Litany, and the petitions were doubled-- I'm very much an amateur of the liturgical arts and couldn't have sworn one way or the other if these rubrical obediences were or were not kept at the Paschal Vigil.
***
Domus M. le Chanoine Jean-Marc Fournier Notre-Dame de Chrétienté Pèlerinage de Pentecôte